Folk Art in Russia and Ukraine

Russian and Ukrainian folk arts are rooted in and reflective of the cultural life and include objects which historically are crafted and used within a traditional community. They encompass the body of expressive culture associated with the fields of folklore and cultural heritage.

Folk art may tell a lot about the Russian and Ukrainian national character and history, giving insight into people’s ideals of beauty and happiness. There are dozens of various types of folk art, including woodcarving, lace-making, beading, wood and metal painting, ceramics, prints, embroidery and items made of leather and fur. Many of folk-art styles are world-renowned, such as matryoshkas, Gzhel ceramics, Zhostovo trays, the shawls of Pavlovsky Posad, Volgda lace-making, Rushniks, Dymkovo toys, as well as the painting and decorating techniques of Petrykivka, Palekh, Khokhloma and Gorodets.

These vital and constantly revived artistic traditions are shaped by values and standards of excellence that are passed from generation to generation, most often within family and community, through demonstration, conversation, and practice.

Here are only few examples: Matryoshka doll is a Russian nesting doll. A set of Matryoshka dolls consist of a wooden figure which can be pulled apart to reveal another figure of the same sort but somewhat smaller inside. It has in turn another somewhat smaller figure inside, and so on. The number of nested figures is usually six or more. The true artistry is in the painting of each doll, which can be extremely elaborate. The theme is usually peasant girls in traditional dress, but can be almost anything; for instance, fairy tales or Soviet leaders. Khokhloma, Hohloma or Khokhloma painting (хохлома or хохломская роспись in Russian) is the name of a Russian wood painting handicraft style and national ornament, known for its curved and vivid, mostly flower, berry and leaf patterns. Often the Slavic mythical figure of Russian fairytales Firebird is also a part of Khokhloma painting. When painted on wood, in most cases red, black, green, yellow and orange are used over a gold background. The effect it has when applied to wooden tableware or furniture, making it look heavier and metal-like. The Khokhloma painting symbolizes the high importance of forests and nature in Russian culture and its history.

Khokhloma first appeared in the second half of the 17th century. The handicraft owes its origin to the Old Believers, who, fleeing from persecutions of officials, took refuge in local woods.
The Khokhloma handcraft seemed to be fading away in the early 20th century, but it revitalized during the Soviet times. The Khokhloma craftsmen united into artels in the 1920s – early 1930s. In the 1960s, the Soviets built a factory near the Khokhloma village. Zhostovo painting (Жостовская роспись in Russian) is an old Russian folk handicraft of painting on metal trays, which still exists in a village of Zhostovo in the Moscow Oblast. It appeared in the early 19th century mainly under the influence of the Ural handicraft of flower painting on metal. The most widely used motif of the Zhostovo painting is a bunch of mixed garden and wild flowers, which is simple and laconic in its essence. The edges of a tray are painted with a light golden ornament called уборка (uborka). A finished tray is then covered with three layers of light lacquer and polished to brilliance.

Every single tray is a hand painted direct from the eye and the heart, with no stenciling or guides lines to work from and then signed by the artist a complete original one of a kind work of art. Although the artistic structure and composition of other trays may be similar. The artist intentionally paints a different and individual masterpiece each time.

Zhostovo masters are complete in their knowledge of the flowers biological structure but purposely mix the true life forms with a hint of fantasy, giving us the incredibly beautiful creations that the masters of Zhostovo produce. Gzhel is a Russian style of blue and white ceramics which takes its name from the village of Gzhel, where it has been produced since 1802. To be more precise, Gzhel is the name of the region close to Moscow which includes about 27 of villages and small towns. Pottery production and then later porcelain manufacturing is based on presence of porcelain clay in the area, which is perfectly suitable for these purposes.

Gzhel pottery is seen in hundreds of varieties: from dinner sets, samovars, vases, candlesticks, and clocks, to lamps, statuettes, and figurines. Each porcelain piece is made with the highest attention to detail, by people who devote their whole lives and careers to accentuate the art of Gzhel porcelain making. Each of our blue and white porcelain – Gzhel items is 100% authentic and is stamped with the original factory seal. Palekh miniature (Russian: Палехская миниатюра) first appeared in 1923; it is a Russian folk handicraft of miniature painting, which is done with tempera paints on varnished objects made of papier-mache (such as small treasure boxes, powder boxes, beads-boxes, caskets, pens, brooches and etc.). Village of Palekh is located in 350 kilometers Northeast of Moscow. The technology of making a semi-finished product was borrowed from the lacquer handicraft masters of Fedoskino

The Palekh miniatures are usually represents characters and scenes from real life, literary works and Fairytales. Palekh Boxes are painted with bright paints over the black background and are known for their elongated, graceful figures (as on icons), elaborate gold and/or silver ornamentation applied in fine lines throughout the painting with intricate decorative borders. Fedoskino miniature (Russian: федоскинская миниатюра) is a traditional Russian lacquer miniature painting on papier-mache, named after its original center Fedoskino, which is located 40 kilometers to the north from Moscow. The secrets of making and painting on papier-mache in Fedoskino have been passed from one generation to another for over 200 years now. Lacquer miniatures of Fedoskino are made with the help of multi-layer oil painting on the primed papier-mache surface with special lining. Most of the Fedoskino boxes have a black background on the outside and are covered inside with scarlet or bright-red lacquer. The popular motifs used in Fedoskino miniature are all sorts of tea-drinking with samovar, troikas (carriage with three horses), and scenes from Russian peasant life. 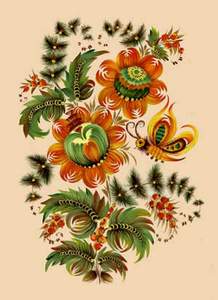 Petrykivka decorative painting is a traditional Ukrainian folk painting style that has played a spiritual role in people’s lives for centuries. It originates from the Petrykivka village in the Dnepropetrovsk region, in central-south-eastern Ukraine.
From the ancient times,people believed that in beauty there is magic and spiritual strength, and therefore windows and doors, dishes and clothes, everything should be magically framed by ornament, in order to protect the people inside. This ancient tradition of hundreds of years of ornamentation is seen widely throughout Ukraine to this day.
Ornamental motifs are dominated by bright, vivid colors. They seem simple at first glance, but if you look closely, you can see the long and painstaking work of the artist, delicately portraying the tiniest details of the picture. A modern Petrykivka’s pattern is 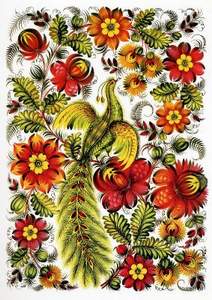 characterized, above all, by plants: the main motifs are painted wild flowers, branches of viburnum, hollyhocks, peonies, asters. It is based on careful study of real local flora, combined with a colorful imagination. The motifs often use garden and meadow flowers and berries such as strawberries and grapes. These are interspersed with images of foliage, ferns, buds and feathers.
In the mid-20th century, birds appeared in the ornaments – both fantasy and real, such as peacocks, swans, and roosters. The bird is often placed in the center of the composition, surrounded by the flowers, leaves and berries to provide balance. When you wear Kurochka Clothing’s  Patterns shirt, its flowers will bring you wealth, health and love. In the 18th and first half of the 19th centuries, headscarves and sarafan fabrics were distinguished by the breathtaking ornamentation sown on them in goldenthread. The decoration of Pavlovo-Posad (a district near Moscow), which decorated shawls and headscarves with colorful motifs, was developed in the latter half of the 19th century. The magnificence of the color and composition of the Pavlovo-Posad headscarf owes to the virtuosity of the masters who cut the pressing boards used to print drawings on the fabric. Each color is printed using a different board; as many as several dozen boards can be used for a single item.