In Old Russia, the new year began in March. It was celebrated like most spring holidays, with the ushering in of the sun, the warmth, and anticipation of new life. When Orthodox Christianity took root at the end of the 10th century, New Year’s was moved to September 1st, following the Byzantine calendar. But when Peter the Great’s reforms to Westernize the country began, it changed again. On the eve of the year 1700, at midnight, Peter the Great stepped out onto the Red Square with a torch in hand and set off fireworks celebrating the new year, on its new date: January 1st, according to the Julian calendar which was used in Europe. Along with the new date came new, more secular traditions: wishing a Happy New Year to your family and friends, decorating a fir tree, sledding. It took people no time at all to accept this new holiday, and it became the biggest and most cheerful celebration of the year. 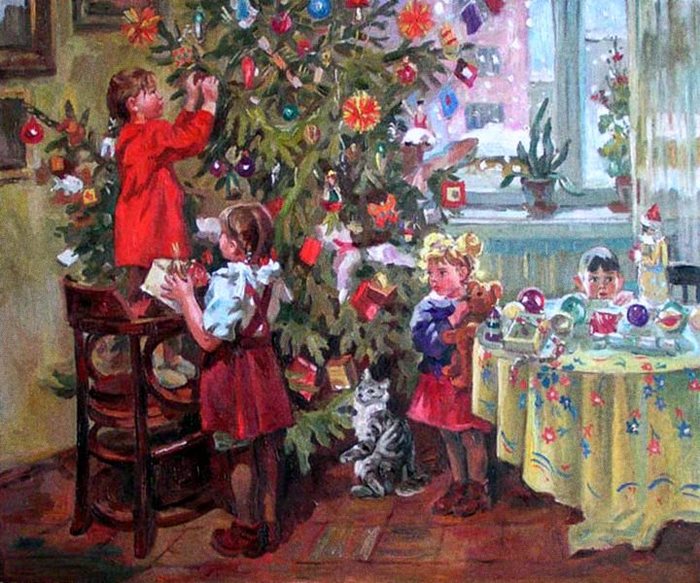 New Years is celebrated at home, with the family, necessarily with a decorated tree. The TV is another compulsory part of the New Year tradition – it always had to be turned on when everyone sat down at the dinner table in order to hear the broadcasts of the government heads giving everyone their holiday wishes. And if, as the clock strikes twelve, you made a wish, it would certainly come true.

Two more characters present at every New Years celebration are Ded Moroz (Father Frost) and his granddaughter, Snegurochka (from the word sneg, snow). They come in the night, when the children are asleep, and leave presents under the tree. In olden times, Ded Moroz was a strong and fearsome old man, the owner of snowy fields and woods, who brought cold, snow and blizzards to the earth. He was never exactly evil, just strict and fair, kind towards the hard-working, severe with the lazy. In those times, he rarely gave gifts. In fact, it was the reverse: people who believed in his power gave him gifts, in hopes that he would become kinder. 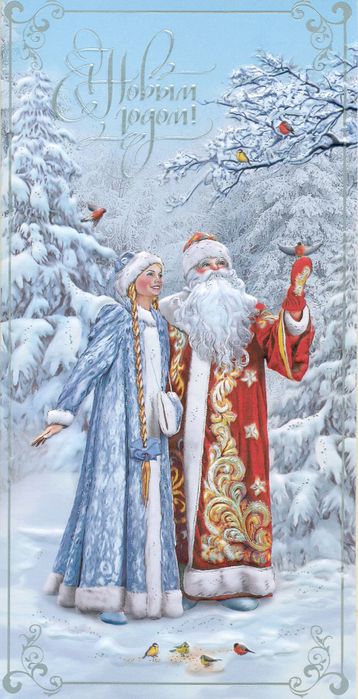 When the people of Russia began to celebrate New Year during the winter, Ded Moroz became the holiday’s protagonist. His demeanor changed, too; he softened up and began to bring gifts to children. Perhaps he took a page out of Santa Claus’ book, or perhaps they are one and the same as both are derived from St. Nicholas.

Ded Moroz wears an ankle-length red coat which is sometimes embellished with stars, cinched with a wide belt, a red hat, mittens and valenki, very warm traditional felt boots. He always has a staff made of silver or crystal. He rides in a Russian troika, a sleigh drawn by three horses, with an evergreen tree and Snegurochka by his side. Snegurochka is eternally young and stereotypically beautiful, with snow-white skin, deep blue eyes, cherry lips and blond hair. She wears a stunning, white gown and a crown, decorated with silver and pearls.

Perhaps the most important part of the New Years tradition is the holiday table, and above all, the salad Olivier and Herring Under a Fur Coat. It’s a sin for a table to be missing these dishes, but the holiday would also be unthinkable without vinaigrette, holodets, jellied fish and tongue, deviled eggs, salad with cod liver, beet salad, prunes and nuts, sandwiches with red caviar, toast with two pieces of sprat and a slice of cucumber (where people found fresh cucumbers in the dead of winter back then is a mystery), and a ton of kielbasa and pickles. And these are just the appetizers. They’re followed by baked chicken or duck, roasted potatoes and other hot foods. For desert, choux pastries, Napoleon cake, and tangerines (almost impossible to get during Soviet times). Champagne to toast with at midnight and, of course, vodka. Nothing is more Russian, or more exciting, than this.